Five most interesting search news stories of the week Whether you’re taking a break from Black Friday shopping mania, recovering from a post-Thanksgiving food coma, or just getting on with your normal working day because you’re in one of those boring countries that doesn’t celebrate Turkey Day (*raises hand*), we’ve got all of the most up-to-the-minute search news for your reading pleasure.

This week, Google has released some canny changes to AdWords ahead of Black Friday, introverts have a new best friend in the form of real-time Popular Times data, and we take a look at the steps Facebook has taken so far to tackle the issue of fake news.

As retailers around the world look to cash in on the annual shopping frenzy that is Black Friday, you can be sure that Google, at least, will be raking it in. Ahead of this year’s Black Friday, Google has released additional store visits data to the AdWords location extension, allowing retailers to see exactly how far away people are from their store when they perform a search.

It also published a bumper crop of Black Friday data with shopping searches and foot traffic trends for 2016, in a move that will benefit both physical and digital retailers alike.

Christopher Ratcliff reported for Search Engine Watch this week on exactly how the AdWords improvements work, as well as some key findings from the Black Friday data.

If, like me, you’re a hard-core hermit introvert who hates to set foot outside unless absolutely necessary, good news! Google has a function that’s tailor-made for you.

Google’s Popular Times feature in Search and Maps has always been convenient for checking when a business is typically busy, helping you to avoid the rush. But now, the feature works in real-time, allowing you to see whether a bar or restaurant is busy right at that moment so you can decide whether or not to leave the house.

Christopher Ratcliff took a closer look at the new functionality this week, including the ability to see how long people typically stay at any given location, and an improved ‘operating hours’ feature for business, service providers and restaurants within larger premises.

Google’s rich cards have expanded to restaurants and online courses

What’s that, you say? You want some more Google news? All right! How about the news that Google has now expanded its ‘rich cards’ to cover local restaurants and online courses?

Rich cards are a visual carousel of search results in ‘card’ form which appear underneath search snippets on mobile, allowing users to swipe from one result to the next.

Like rich snippets, they use schema.org structured markup to display content, making it even more important for website owners who want to stay ahead of the game to hop on the schema.org bandwagon. 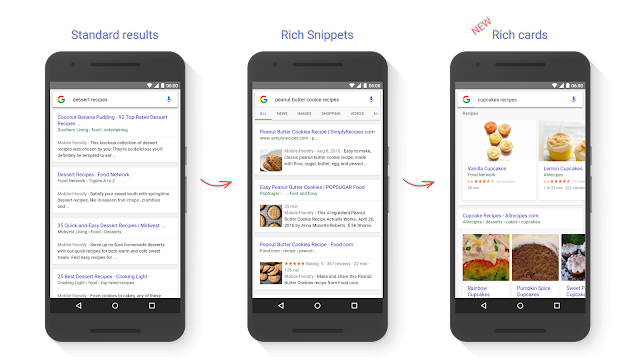 When rich cards first launched back in May, they were limited to film and recipe searches. Now Google has expanded their repertoire to include restaurants and online courses, as reported by Search Engine Journal’s Matt Southern. Google’s developer documents for local restaurants and online courses give instructions for website owners on the right structured data to include to trigger rich cards for their business.

Not to be outdone, Google’s main rival in search has also been making improvements to its own carousel-style feature: the Black Friday flyers carousel. Jennifer Slegg reported for The SEM Post on the new look for Bing’s annual Black Friday carousel, which this year is serving ads directly from the brand advertisers instead of via Flipp, its partner of last year. 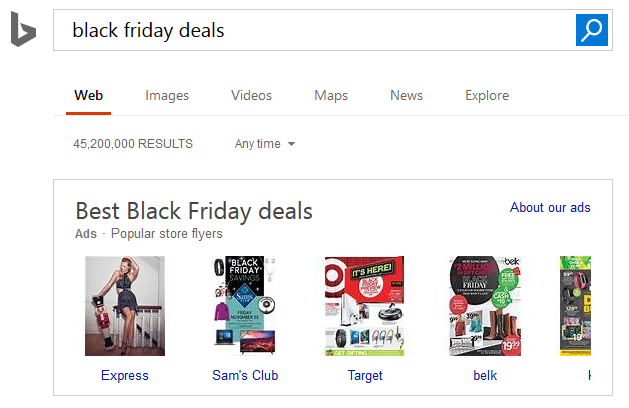 Bing is still showing ads above the carousel for retailers who want to target Black Friday keywords, but is limiting those to only two spots.

While the flyers themselves are eye-catching, they don’t provide a lot of useful detail to make shoppers want to click on them, and it would be interesting to see how their CTR compares to regular text ads if Bing decides to release any data. Is the visual alone enough to make people click?

Has Facebook found a way to deal with fake news?

We reported last week in our search news roundup that Google was tackling the widespread issue of fake news online by cutting off their AdSense ad revenue, and Facebook has been close behind.

Tereza Litsa took a look this week at the measures that Facebook has taken to deal with fake news on its site, and whether they are enough to deal with the real issue at heart.

Facebook may not be keen on accepting its responsibility as a curated media publisher (and it doesn’t see the platform as such), but it certainly needs to admit how its ambitious plan to reach more people and attract more publishers have their consequences.

The age of social media and the way publishing speed became more competitive is certainly the main reason fact checking became a luxury for many publishers, while users got addicted to an increasing content consumption (and a filter bubble that serves the relevancy they like).

Moreover, we are also experiencing a changing nature of media, with the integration of digital technology being demanding and challenging.